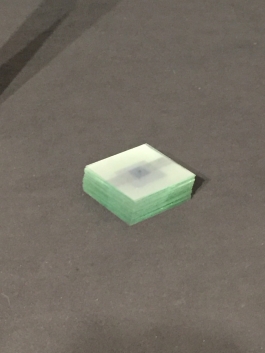 Being fascinated by the way water seems to automatically slow things down, research on coral bleaching resulted in this multi-media installation. When I discovered that the age of a coral reef is depicted by drilling a cilinder of the corals' skeleton, slicing it and x-ray scanning it to see the age layers I became obsessed with the idea of showing multiple stages of age in one image. Coral seemed to show its age in a similar way you can read a tree's age through its rings. When looking at coral growth, you can often only find time-lapses showing months of growth in mere seconds. Focussing on their slow growth and age-rings, the installation was built out of a video and a small object. The video shows a reverse time-lapse of a growing coral over which images of water are opened. The object shows the same images of water, found in random files on a hard drive, printed on transparants and divided by glass plates.